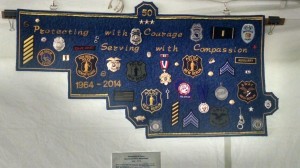 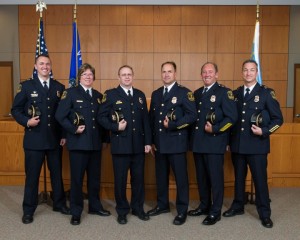 Where were you, 50 years ago? The top song, “I Want to Hold Your Hand” by the Beatles was playing on the radio, and Disney’s “Mary Poppins” was playing at the movies.  Back in 1964, New Berlin’s population was only 15,700 and the construction of the New Berlin industrial park had just started. Our police department was also just formed. They started with nine sworn police officers on staff and the first Police Chief was William Sadusky. The original building was located at 16248 W. National Avenue, not far from where it stands now. Let’s fast forward to 2014, and New Berlin’s population has grown to almost 40,000. New Berlin’s Police Department has 68 sworn officers and two K-9s. In 2014, our Police Chief was Joseph Rieder. The Safety Building is located at 16300 W. National Ave. New Berlin citizens and businesses are fortunate to have a very dedicated police department taking care of our safety! The NBPD provides services and training programs for the community such as Neighborhood Watch, Teen Court, Citizens Academy, Safety Town, Business Security, DARE, Midnight Basketball, Summer Volleyball, Safety Saturday and many more! We are very proud and honored to know the men and women that work around the clock protecting and serving our community. The shape of the quilt represents the footprint of the New Berlin Safety building as it is today. The blue and gold represents the department color. The embellishments on the front of the quilt are from all of the different areas of the police department. Some of the patches are even from the original uniforms. The quilt was designed and made as a joint effort project between Julie Rieder, the wife of the former Chief of Police, and Stephanie Brown, the Founding President of the New Berlin Police Citizens Academy Alumni Association, to commemorate the 50 years of service of our amazing New Berlin Police Department. PROTECTING WITH COURAGE, SERVING WITH COMPASSION.

Anniversaries are a good time for reflection and this year marks our fiftieth year of service to the City of New Berlin. To commemorate the occasion, we have adopted the motto ‘Protecting with Courage and Serving with Compassion’ as it best embodies not only what we do, but how we do it.
Fifty years ago, the newly appointed New Berlin Police Officers each received 40 hours of training before going out on patrol. Today, officers attend 720 hours of academy training, and must successfully complete four months of field training before going solo.
Fifty years ago, officers carried a six-shot .38 caliber revolver and a wooden baton to defend themselves and others against attack. Today, officers carry a semi-automatic pistol, have immediate access to a semi-automatic rifle, and are armed with an array of less than lethal force options including pepper spray and electronic control devices. Bullet resistant vests and shields are also part of their defense systems.
Fifty years ago, officers did not carry portable radios and the police radio in their car had perhaps two channels.  Today, officers carry a portable radio on their duty belt that is programmed to allow them to communicate with hundreds of other police, fire, and emergency government personnel.
Technology, training, and events over the last fifty years across the globe have undoubtedly changed the way we do police work. The one constant, however, is that police work is still ‘people work’; people serving and protecting other people. That principle will never change and we look forward to serving and protecting people in New Berlin for another fifty years.